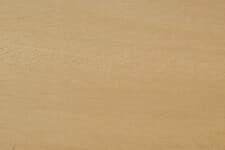 Abachi comes from the tropical regions of West Africa. The most important producers of abachi logs are Cameroon, Nigeria, Ivory Coast and Ghana. The abachi tree can reach a height of up to 55 m, a branch-free trunk length of 25 m and a diameter of 0,9 m - 1,5 m.

Abachi is characterized by its relatively light and soft wood with an average bulk density of 390 kg/m3 and a moisture content of 12%.

The low hardness according to Janka of 1900 N and the high dimensional stability, because abachi has a low radial and tangential shrinkage rate at a wood moisture content of 12% (wheel 1.1% / tan 2.4% -> looks stable) makes abachi a wood with very high staying power .

The relationship between stress and strain, which causes the force to act on the elasticity of the wood, is given in Abachi with a MOE of 6700 N/mm2 and the flexural and compressive strength until fracture is the MOR is given as 57 N/mm2.

The durability class by Abachi is in "Class 350" according to DIN-EN 2-5. Since the highest durability class is "Class 1", the Abachi produced is mainly used indoors. Because outdoors, Abachi is very quickly attacked by insects and fungi.

The heartwood is relatively hard and may contain mineral inclusions.

For sauna, furniture and music

In the sauna area, abachi is often used for wooden benches and other accessories because of its ability to quickly absorb ambient moisture. Abachi is also widely used as hidden wood in furniture construction due to its high dimensional stability and ease of processing. Abachi is even used in instrument making when building pianos or organs (organ pipes). Abachi is also processed as a veneer.

Freshly beaten abachi (wet) has a foul smell, some say it smells like socks that have been worn several times. The wood then loses this smell during the drying process.

next type of wood:
afzelia