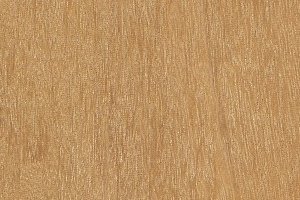 Tatajuba, also traded as Bagassa, is native to tropical South America. The Tatajuba tree has its main occurrence in the countries of Brazil and Guiana. It among the lesser-known woods in the forests of northern South America.

With its high resistance (class 1) and relative hardness, Tatajuba is a durable decking wood. The wood color is a homogeneous yellow-brown with clear shiny stripes, which darkens to a dark red-brown in the sun. The planed surface can show slightly rough structures from interlocked grain.

The young Tatajuba tree differs significantly in appearance from the older tree. In the past, it was therefore assumed that there were two different species. Tatajuba is one of the latex-producing species of wood and can reach a height of 45 m and a diameter of up to 1,90 m at breast height.

With an approximate raw density of 1100 kg/m³ and a moisture content of 12%, Tatajuba, like Cumaru and Massaranduba, is one of the heavier woods. The hardness according to Janka is 7800 - 10000 N, the dimensional stability is good.

The low tangential and radial shrinkage rate of around 0,3% tangentially and 0,4% radially and the durability class according to DIN-EN 350-2 of "Class 1" mean that Tatajuba is a very suitable wood in the construction area and for outdoor use is. The first classification states that tatajuba is resistant to attack by fungi and wood-boring insects.

Despite its high density, the wood of the Tatajuba tree only has a moderate degree of shrinkage and is therefore easy to dry without. Although the hardness according to Janka is very high, Tatatjuba can also be processed relatively well under the influence of high forces.

The relationship between stress and strain, which causes the force to act on the elasticity of the wood, is given by Tatajuba with a MOE of 21490 N/mm2 and the flexural and compressive strength at break, the MOR, is given as 78 N/mm2.

Due to the positive properties mentioned above, the high durability, the high resistance to fungi and insects, Tatajuba is also very well suited as construction wood for the substructure of terraces. The only moderate stamina is somewhat problematic. Therefore, the distance between the substructure of a Tatajuba terrace should not exceed 45 centimeters when building the terrace. Tatajuba is mainly used in structural engineering, furniture making, outdoor flooring and boat building.

next type of wood:
Teak