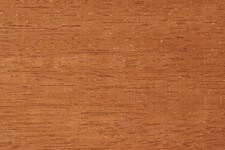 Afzelia is found in the tropical regions of Africa and Asia. There are fourteen known species. The economically most important Afzelia woods come from Africa. The Asian genera play only a subordinate role in timber production. Therefore, this article focuses on the African woods of the trade names Afzelie or Doussié.

Subdivision according to type and origin

Depending on its origin, the wood of the Afzelia genus can have different characteristics.

The known Asian species of Afzelia are similar to the Merbau. Afzelias Substitute are walnut and other dark-toned tree species of the so-called mahogany species.

With an average raw density of 820 kg/m³, its hardness of 8200 N is significantly higher than that of teak (4450 N) and oak (4200 – 6300 N). During the drying process, due to the hardness of the Afzelia, care must be taken to ensure that drying is carried out slowly Afzelia wood warps if the technical drying is too fast.

Doussié the best of Afzelia

The so-called Doussié, also known in German as Edelkirsche or Brilliantkirsche, in which only the species Afzelia bipidensis  and Afzelia pachyloba are united – also as Afzelia spp. (Afzelia, doussie) referred to as the best quality Afzelia wood on the market. Then Afzelia, Doussie has a very strong resistance to fungal attack.

Due to the high raw density of 820 kg/m³, Afzelia has a very high thermal conductivity. This property is used in heated parquet floors where Afzelia is very often used. Afzelia is used in door and window construction (frames), in boat building, for stairs, tables and garden furniture.

In the Netherlands, Afzelia was also used for water weirs (today, azobe is increasing), but Afzelia can also be used in constructions with high tensile forces, such as in bridge construction.

Because of its wood chemical properties, Afzelia can even be used for chemical barrels. We can also find Afzelia in art because it is also good for making wood carvings and turned shapes such as jugs.

The wood-physical and wood-mechanical properties of Afzelia are reflected in a high dimensional stability. Shrinkage or swelling is 1.0% radially and 1.4% tangentially. All of this information is based on a moisture content of 12%.

The relationship between stress and strain, which causes the force to act on the elasticity of the wood, is expressed in Afzelia with a MOE of 15.200 N /mm2 and the flexural and compressive strength to break the MOR is given as 125 N/mm2.

All of these stated positive properties of Afzelia wood lead to the question of the durability of the wood. As already described in the uses that Afzelia offers to humans.

We were able to determine that Afzelia is used very successfully outdoors. So if Afzelia is suitable for use in water, it must have a durability of 1, since in this environment the infestation by water borers and rot fungi is very high. But also outside the water Afzelia is characterized by its special resistance to fungal attack and insect infestation, especially Doussier from West Africa.

next type of wood:
acacia